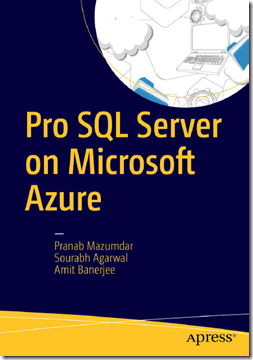 My last contribution to a book was in 2012. With the advent of the cloud and my continuing work with SQL Server, I jumped at the opportunity when my friends and colleagues, Pranab Mazumdar [t] and Sourabh Agarwal [t], talked to me about contributing to a book on running SQL Server on Azure.

The book “Pro SQL Server on Microsoft Azure” attempts to teach the basics of Microsoft Azure and see how SQL Server on Azure VMs (Infrastructure-as-a-Service) and Azure SQL Databases (Platform-as-a-Service) work. This book will show you how to deploy, operate, and maintain your data using any one or more combinations of these offerings along with your on-premise environments. You will also find some architecture details which are very important for an end user to know in order to run operations using Azure.

The book is available on Apress and Amazon.

We would love to hear any feedback about the book. It could be good, bad or ugly. You will find the resources available for download on the site.

Happy New Year to all of you out there!!

The year that was…. 2012… was an action packed year in all things SQL. Microsoft launched SQL Server 2012 which introduced a large number of enhancements and new features in the database engine, integration services, analysis services and reporting services. If I would have to summarize my learning time year-on-year, then I have spent the maximum time in 2012 studying and enhancing my knowledge in SQL Server due to all the new features introduced.

TroubleshootingSQL also had a good year… The Facebook page now has over 300 likes… The Twitter avatar of TroubleshootingSQL has over 200 followers and my blog showed a significant YoY growth in visitor count!! So thank you for all the patronage and I am glad the SQL folks find my posts useful! The TOP 5 posts of the year in my blog were:

The new Wiki series that I started also received significant amount of coverage as well and the posts #2 and #3 mentioned above are part of my Wiki series.

I did speak at various community events throughout the year, the most significant of them being TechEd India.

Another highlight was the book launch at SQL PASS 2012 which I co-author: Professional SQL Server 2012: Internals and Troubleshooting, which is now available both as e-books as well as paperback across many regions.

What can you look forward to in 2013. Since the world did not end, I will write about all the posts that I have been holding onto (partly due to procrastination) due to the fact that world was going to end in December!!

You will see new additions to the SQL Wiki series, more posts about Power View, useful features in SQL Server 2012 that are not commonly used and much more! So stay tuned….