I recently had the need for testing out a setup program which installs database components, integration services packages and reporting services reports. Setting up a machine like this would be really quick if you have Hyper-V installed and a VHD already pre-created with a SQL Server image. What if you do not have that handy and need to carry out your testing. This is what Microsoft Azure Virtual Machines comes to the rescue.

END_OF_DOCUMENT_TOKEN_TO_BE_REPLACED

This is a completely non-SQL Server post. I had to recently convert a large number of word documents into Web Archive (.MHT) format. I would not mind doing that for one or two documents but when I have over 50 documents to perform this exercise on, it could get cumbersome and monotonous! This is where PowerShell came to the rescue.

The most common example available on the web is to convert Word documents to PDF. What I needed for the work that I was doing was a way to convert the Word documents to the Web Archive format. After a few Bing searches, I was able to determine that the Web Archive format enumeration number was 9. The following link has information about all the enumeration values: http://msdn.microsoft.com/en-us/library/office/bb238158(v=office.12).aspx

The script can be downloaded from OneDrive also.

Recently, I was working on a requirement to convert a number of BLG files into CSV and then changing the CSV files into Excel files.

So, the script below does the following:

1. Picks the BLG files from a folder and then creates a CSV file from the BLG file using RELOG.EXE

2. Then the same CSV file is converted to a XLS file

As always, this is a Powershell script which can be adapted in any way possible. Happy perfmon analysis!

The script can be downloaded from OneDrive as well.

We had a brilliant line-up of topics… Just to re-cap the day.. Here is a short summary..

The day started off with a keynote session from Anupam Tiwari who is Business Program Manager and closely works with the team that supports developer technologies at Microsoft. He talked about where IT as we know it today is headed tomorrow.

Sourabh Agarwal [Blog | Twitter] covered the performance enhancements in SQL Server 2014 and explained why this version is bigger, faster and stronger!

Then I had the opportunity of explaining the new enhancements in backup and restore in SQL Server 2014. I talked about backing up to a URL i.e. a storage account in Azure, managed backups to Azure and encrypted backups. The slide deck from today’s presentation is available below.

This was followed by Pinal Dave’s [Blog | Twitter] session on “Performing an effective Presentation” One key takeaway from this session is that the art of story-telling can weave out a presentation which can keep the audience hooked! He demonstrated this during his session and kept the audience awake after lunch!

Then we had Balmukund Lakhani [Blog | Twitter] talking about InMemory Enhancements with SQL Server 2014. You can follow his SQL Server 2014 learning series to gain in-depth insights into the various enhancements that he talked about.

His session was followed by Vinod Kumar [Blog | Twitter] who talked about the Some more lesser known enhancements with SQL Server 2014 where he talked about managed lock priority, delayed durability and more.

And last but not the least was Kane Conway – (Support Escalation Engineer at Microsoft) who talked about Power Packed – Power BI with SQL Server. If you have not played around with PowerBI, then you should start now! Presenting data with compelling visualizations just got a new definition. 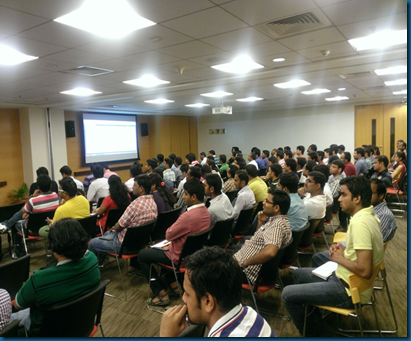 It was a house full event and I had to put in two pictures to showcase the turnout today! It is not possible to have a successful event without the audience participation. We personally want to apologize to folks who came in late and had to return because the hall was overcrowded and the seats were full. Please do come in early for next UGs for sure.

The presentation that I used at the event today is available below:

I will be presenting on Backup Enhancements in SQL Server 2014 and will show you some exciting new features. This will get you thinking about your backup strategy when you upgrade to SQL Server 2014.

Just to tickle your learning taste buds, the agenda for the day is mentioned below:

Register for the event (registration link) and feel free to pass along the message. The day will have an early start… 9.30AM!! Get your learning hats on and come visit us on Saturday!