Explaining the bits and bytes of SQL Server and Azure

Nov 6th -9th seemed like a whirlwind with the PASS Summit seeing a record number of registrations and probably a record number of first timers as well! The number of people thronging towards the Washington State Convention Center in the morning was a sight to see! The hotels around the convention center were over booked. If you were one of those individuals who booked late, then you either ended up paying steep prices or not getting your preferred rooms. The evenings of the event days saw most of the eating joints being thronged by the PASS attendees where the networking continue till late into the night!

Not only was this a fun event but I did manage to meet a number of folks (Tweeps) face-to-face that I interact with on Twitter or other technology forums. I did miss out on meeting a few folks that I wanted to but that would have to be now done at another time and place. I also got to meet other folks from the CSS (Bob Ward, Adam Saxton, Rohit Nayak and more) and SQL CAT teams with whom I interact with on a regular basis but hardly get to meet regularly due to the cross geographical locations.

The evening revelry also showed why Twitter is a powerful medium of communication. The venues were decided and broadcasted using the Twitter hashtag #sqlpass. Some of the post event parties had some highlights as well like the flash mob…. The karaoke sessions at the Hard Rock Café…. The Unicorn seemed to be having a ball!! (If you were there, you know what I am talking about).

I had recently co-authored a book, Professional SQL Server 2012: Internals and Troubleshooting, which was launched at the event. There was a book signing session with the authors where we gave 30 books through a lucky draw. Thank you SQL Sentry for sponsoring this! 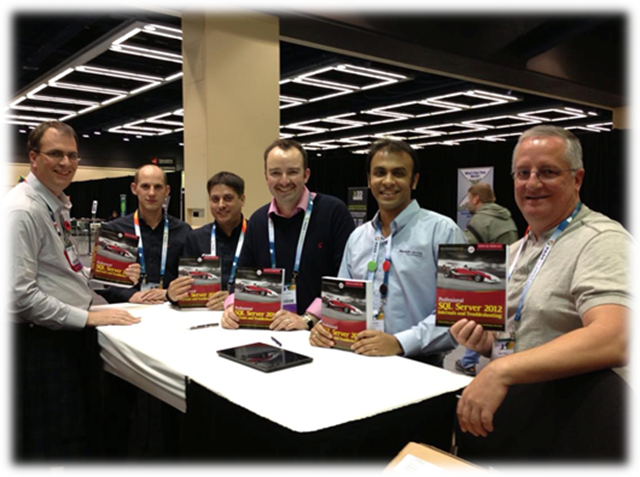 I was also part of the SQL Server Clinic on all three days. I met with various customers who brought their design and troubleshooting related questions which spanned all areas of the product. We were staffed at the clinic with the engineers from all areas of expertise. So it was just a matter of walking up to the SQL Server Clinic, locating the expert and asking your question. I even looked at memory dumps at the Clinic!

Below is picture of one of the peak times at the clinic. The green shirts are the folks that were answering the questions!

#SQLFamily truly rocks! And this year’s #SQLPASS summit was #Awesome! – That is my Twitter update summarizing the event!