A new week begins and the Tools, Tips and Tricks series continues. Today I shall talk about using PsExec (part of the PsTools package) to collect data from a remote box through PsExec. PsExec lets you execute processes on other systems without having to manually install client software.

The .cmd file that I am using in this case has the following commands:

I am running the .cmd file to spawn Process Monitor on a different server and capture a trace using a local file as the backing file. The reason why we would have to run Process Monitor from command line is because while running setup, it’s recommended that you do not log into the passive nodes using Terminal Services or Console Mode.

The command that I used to execute the commands present in the .cmd file is

If you do not prefer the ping method to simulate waits, you can use the SLEEP utility available with Windows 2003 Resource Kit. This utility takes a parameter for milli-seconds to wait. If you need to set filters for Process Monitor, then run the Process Monitor tool in GUI mode and set the Filters and save it. After that Exit Process Monitor and run the above command from Command Line. Or you could alternatively create a configuration file and use the /LoadConfig command line switch for Process Monitor.

Again the possibilities are endless and you can extend this by using the command line options for PsExec and Process Monitor.

Use the options mentioned in Tools Tips and Tricks #1: Process Monitor so that the filters are correctly set and the page file doesn’t get overwhelmed if you are capturing data for long periods or on servers where there is high amount of activity.

I recently wrote about importing a Process Monitor trace into SQL Server database table and crunch up the data to extract the events and call stacks. This prompted me to think about capturing data with Process Monitor and some things I learnt along way while using this tool working at CSS.

The first tip is to disable any activity that you don’t want to capture or are not required for the issue that you are troubleshooting. The capture tracks three classes of operations: File System, Registry and Process. In the toolbar show on the left in the screenshot, you can enable/disable the following captures:

More information about the above is available in the Process Monitor help file. 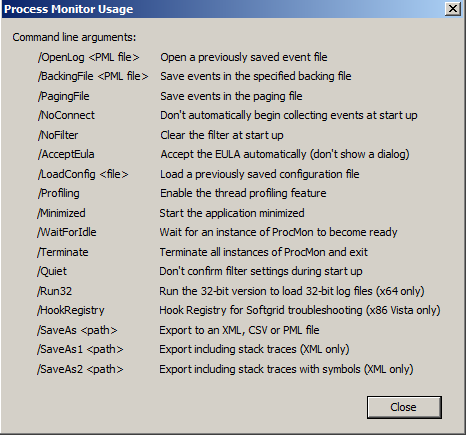 The command line options specified are immensely helpful if you are scripting the capture of a trace using a batch file or if you are generating an automation routine to load the captured data into another data source. I had used /OpenLog and /SaveAs1 option to generate the XML file from the saved .PML file.

One of the most useful options that I suggest using when capturing a Process Monitor trace is to use the backing file option (/BackingFile command line parameter or CTRL+B when using the GUI). This prevents using the page file as the backing store for trace capture and avoid running in unresponsive server issues while you are still capturing your trace and the paging file fills up. I normally point the backing file to a local drive on the machine which has sufficient amount of disk space.

Process Monitor can use symbol information, if available, to show functions referenced on event stacks. You can point to the symbol path (local symbol cache or Microsoft Symbol Server: http://msdl.microsoft.com/download/symbols) using Options –> Configure Symbols. Additionally, you can specify the path to the source files for the application in the same dialog. This will help you resolve the function calls using the symbol path and if a source path is present, open a text viewer dialog with the source line highlighted which is being referenced. The symbol path is needed when /SaveAs2 option is used for converting the .PML file to .XML format. Note that this option considerably increases the export time due to symbol resolution time involved.

This month’s recurring SQL blog party a.k.a. T-SQL Tuesday started by Adam Machanic (blog | @AdamMachanic) is being hosted by Bob Pusateri (blog | @SQLBob). This month’s topic is about Common Table Expressions which was introduced for the first time in SQL Server 2005. CTEs can be thought of as a derived table which can be self-referenced within a query. With the advent of CTEs, a lot of T-SQL developers made full use of this feature. Personally, I have used CTEs for various data collection and parsing scripts that I use for daily for my day-to-day work. I am a big fan of CTEs and have introduced their usage in one of the blocking reports for SQL Nexus. As with any coding construct, the use of CTEs has it’s PROs and CONs but in this post, I shall not go down the path as there are a lot of depends on whether a particular scenario is fit for the use of CTE of a temporary table. That decision has to be made based on testing against the benchmarks that you have or response-time SLAs that have defined for your application.

Since my primary expertise lies with SQL Server, I examine every opportunity of data analysis with the intention of importing the data into a SQL Server database table and then writing an automation routine over it to help me save the repititive iterations when I am analyzing the same data or need to perform the same set of steps over and over again. Recently I have shifted over to Powershell due to affinity for scripting but that will be a story for some other blog post. CSS uses Process Monitor, a vastly popular tool from Sysinternals, to troubleshoot various problems that we encounter while working on SQL Server related issues. Some of our adventures with Process Monitor are mentioned below:

During my tenure here with CSS, I too have relied on the Process Monitor to troubleshoot some fairly complex issues. Sometimes the Process Monitor .pml files can be quite large if collected without adding appropriate filters and I am just interested in a particular process(es). By 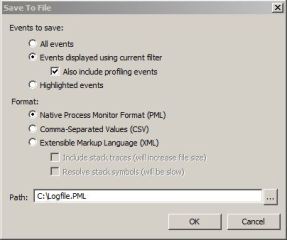 importing the .PML file into a database, I can not only query the imported data using T-SQL queries but I can also write quick automations to look for common stack traces that I know have known issues/problems associated with them. Yes with Process Monitor, you can use locally cached symbols to get the call stack of the function call as well. Note that saving a .PML into XML with resolved stack symbols is slow due to the time taken for symbol resolution. The .XML file that I will use as an example was saved using the “Extensible Markup Language (XML)” option with “Include stack traces (will increase file size)” option enabled. I captured a Process Monitor trace while trying to access a directory which was not present on my server.

I already have a stored procedure to import the saved .XML file into a database table, then parse that existing data and insert the parsed data into the two tables that I have created to stored the event and stack information.

How does the use of CTEs fit in here?

The .XML file has the following structure for the stack and the frames:

Now each operation has a call-stack associated with it which I am interested in importing into my database. But with the existing schema above, I cannot get the information that I require . After exploring the use of multiple ways of parsing the data using temporary variables, temporary tables, recursive CTEs, XML indexes and blah.. blah.. , I found that that quickest way to do this was:

1. Get the event list imported into a temporary table
2. Using the event list generated above, create the call stacks from the <frame> nodes (see code snippet below)

The logic here is that the cteXML used below extracts all frames for a particular event using a counter variable and creates XML data for each of the frames which are parsed by referencing the cteXML in the INSERT INTO…SELECT query.

If you are curious as to how long it takes to import the data, it took me a little over a minute (84 seconds to be precise) to load a 100MB XML file, parse and shred it! I am sure that there are optimizations possible to this method. The screenshot on the left shows the load times. The system specifications on where the data import is being done is:

SQL Server: SQL Server 2008 R2
Now that the data is available in a database table, I can query the information using T-SQL queries. I had attempted to open the directory C:\Foo on my server using Windows Explorer. This information and the callstack can be visible using the following T-SQL queries:

Below is a screenshot showing me that the directory doesn’t exist and the call-stack associated with the function call that failed.

The options are now limitless, you can take this forward by creation for common callstacks in-case you are troubleshooting an application developed by you and have access to the private symbols. Or you could look for common results for certain operations like Operation = QueryDirectory and Result = NO SUCH FILE. My use of CTEs are for the following tasks:

The scripts containing the Stored Procedure definitions and table schemas can be downloaded from here.