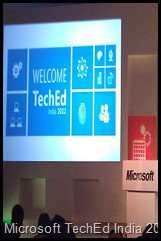 If you were at Microsoft TechEd India 2012 held at Bangalore, then you would agree with me without a shadow of doubt that it is quite difficult to write a wrap-up post of the entire event. The event for me was what I refer to as PPP. And by PPP, I am not talking about Point-to-Point Protocol. What I am referring to is a self-coined term…. People, Passion and Parallel.

People because it was great to connect a face to the twitter handle or online persona that you have interacted with in the past. What amazed me was some of the folks that I met at TechEd introduced themselves with their Twitter handle first and their actual name later! It is phenomenal to see how social media can empower collaboration between a technical community! The #TechEdIn twitter hashtag was trending on Twitter India in less than 15 minutes after the event started on Day 1 and continued to trend for the next three days!

Passion for technology that was evident from Day 1 to Day 3 where the rooms overflowed with people attending the sessions at different tracks. It was as if people were watching technical blockbusters at TechEd!

Parallel is the name of the game as everything that was happening at TechEd was in parallel… Whether it was the networking that was happening between folks or be in the technical sessions being delivered in parallel at the different tracks or the technology showcases displaying the several cool stuff from the sponsors at the venue. I heard multiple conversations in the hallways where debates were being raged (among the attendees) to decide on which session they should attend under which track! And obviously Twitter stands testament to the fact that such a dilemma existed since there were numerous tweets on this topic!

Since my daily bread and butter revolves around Microsoft SQL Server, it was quite obvious that I was lurking around the sessions which had remotely anything to do with data! On day one, I would be found mostly at “Data and Developer – Synergy with SQL Server” and on day three I was mostly at “Know Your Data – A Day in Life of a DBA”. Though there was a copious amount of information exchange in the session, there were also some really humorous moments which deserve a mention:

Vinod [B | T] and Pinal’s [B | T] session on “SQL Server Misconceptions and Resolution – A Practical Perspective” probably landed them as top candidates for a thin one and the fit one series in case they ever choose to pursue a media related career option!

Balmukund’s [B | T] session on “Keeping Your Database Available – ‘AlwaysOn’“ made learning fun and even though he had presented this in the past at other forums… This time around he came back with a totally new look and feel along with a high quality technical session on SQL Server 2012 AlwaysOn features with demos.

The VDI demo that I showed was using the “SQL Server Backup Simulator” which can be downloaded from here. The snapshot demo was shown using a modified version of the code present in the snapshot.cpp file from the Microsoft SQL Server Virtual Device Specification.

I had a lot of fun presenting my session on the “Lesser Known facts of SQL Server Backup and Restore” on March 23rd at TechEd. The slide deck used for the presentation is available below without a few situational humorous elements which wouldn’t really make sense to a person who had not attended the session. (Had to add the disclaimer before I got pulled up with comments that this was the incomplete slide deck!)

The photographs from the session are available on TroubleshootingSQL’s Facebook page. Last but not the least, there needs to a be special vote of thanks to Pinal Dave who ensured that we had a seamless experience during the event.

The session recording is embedded below: